It’s been a long time since we last visited the British Museum – while I loved the idea of it from E Nesbit books and half-remembered school trips, it never seemed like a very practical place to take small children. So many breakable things. So few interactive things. But Reuben has recently developed an interest in the Romans, so it seemed like a good time to re-visit. Plus, there was some kind of vague church connection with the book of Habbakuk (I think it might be something to do with the Babylonians) and that meant that someone else organised the post-church jaunt down to Bloomsbury. First off, we stopped for a play in the park in Bloomsbury Square:

I think I’ve been there before, while looking for book benches with Roo, but it’s a handy little place to know in an area not overly endowed with slides. The kids took some persuading to leave for the museum and, to be honest, it was a bit of a mission to get in. Traditionally we’ve always gone in through the Great Russell Street gate but this seemed to be Exit Only, with a sign pointing at another gate which had a barrier across it. So how could we get in?

The answer seemed to be to just keep walking round the museum – up past Russell Square and to the Montague Place entrance at the back. I imagine you’re actually supposed to go through that other gate at the front but it really was sealed off.  Maybe it was temporary, I don’t know, but security had definitely stepped up a bit. We had to queue and go through a tent, showing our bags to make sure we didn’t have – as the security guard said – any weapons of mass destruction, barring the small child. His words, not mine.

We got in fairly quickly but I was utterly disorientated. Not helped by my friend Dan asserting that the Babylonian room was one floor up from the floor we were on. Or three. It’s all good. We did find it, but our friends with the buggy probably wished we’d taken the lift.

First, we cut through that most famous room – the Mummies. Predictably, Eva yuvved the gold sparkliness of them. Equally predictably, there was a middle-class mother explaining to her children that the British Museum shouldn’t have the mummies because they belonged to Egypt. It was hot and crowded in there, so we moved on to Babylonia and looked at some bits of pottery and things. The British Museum really is quite hands-off, isn’t it?

Roo did start to get impatient after a while so we moved onto what he wanted to see  – the Romans. We spent quite a lot of time looking at pottery, jewellery and mosaics but again, it was hot and stuffy and the kids started whining very quickly. 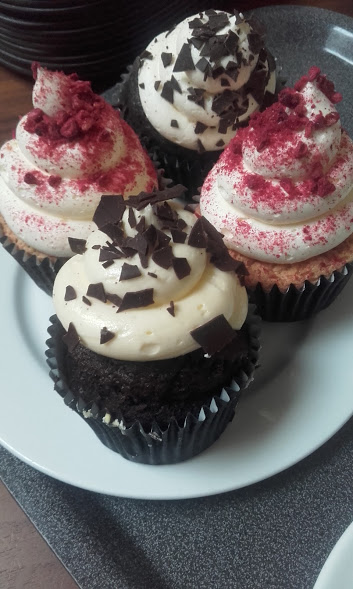 Luckily, coffee was on hand. Here on the third floor, there is a generous-sized coffee lounge, which takes card payments (hooray!), serves soya milk (hooray!!) and has amazing cupcakes. We may have spent longer there than we did looking at the actual museum exhibits. I also had time for a quick game of CSI British Museum – how did this dent get into my coffee?

Answers on a postcard please. Preferably one with grubby 4-year-old fingerprints all over it. 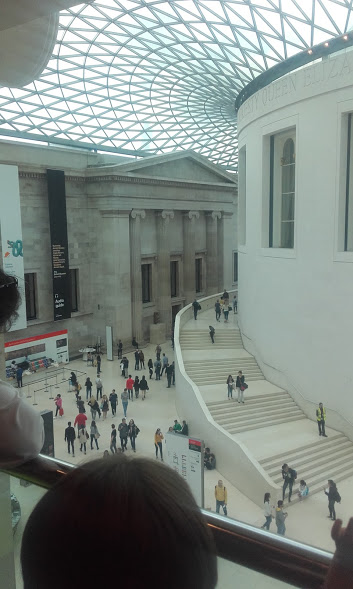 Talking of postcard views, here’s the one over the balcony because, whatever else it is, there’s no denying that the British Museum is a bit of a looker.

And these lovely sweepy staircases:

So it seems that our kids are still a little young to be looking and not touching in lots of similar-looking rooms. It’s an impressive collection but I would say that a short and sharp visit is best, and bookending it with snacks even better.

On the way home, we found this rather beautiful piece of mattress-disposal. Bloomsbury: flytipping with class.