The children have an obsession. Well, they have several and I am indulging at least one of them on a regular basis – it’s so easy to go to parks and let them look at dogs – but the specific one I was indulging on Saturday was Harry Potter. Roo read Philosopher’s Stone last year and Nathan is now manfully ploughing through Order of the Phoenix for bedtime stories….I don’t quite know what happened in between for us to get to this point but safe to say, Harry Potter has been a constant theme this summer.

So when I heard that Hamleys were holding a “Back to Hogwarts” event, it was time to visit. The activities started at 12 so naturally we arrived at 11 with an hour to spare before anything happened. There’s a whole “Wizarding World” in the basement of Hamleys tho, so we managed to entertain ourselves. In fact, Eva declared it “the most wonderful place I ever seen in my yife”. Although that was before she visited the World of Pink on Floor 2. She might have changed her mind.

There is a lot of HP stuff down there. A whole wand shop with a diadem of Ravenclaw sparkling in the window. An invisibility cloak video. A real live Golden Snitch whizzing about. A giant Lego Hagrid. And lots of other photo opportunities: 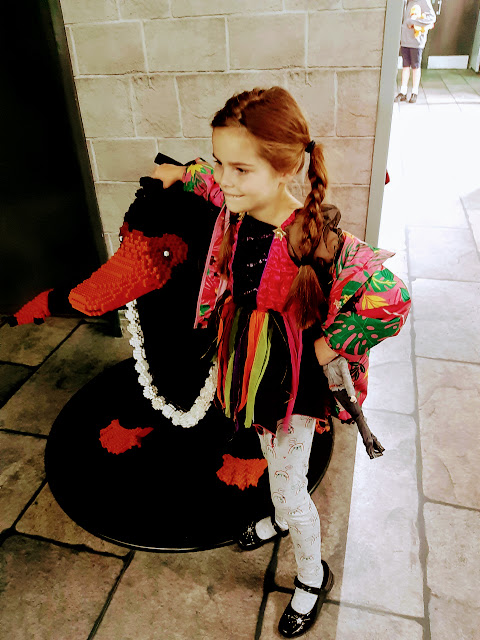 I don’t know whether the lego was only there for the event or if it’s permanent but Roo was very taken with the giant Harry Potter minifig made out of lego. You can tell it’s a minifig by the claw hands: 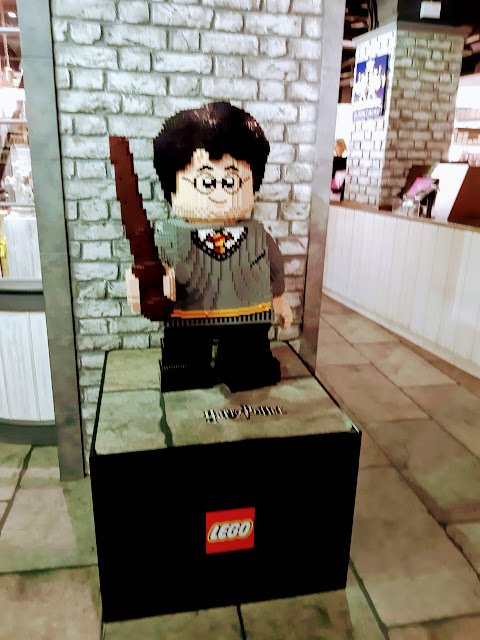 We were starting to tire of the basement – even if the kids weren’t – so I took Roo uo to the toilets on Floor 5, stopping off at Floor 4 to learn how to fly a drone. And not buy one. Sorry, charismatic drone salesman guy. 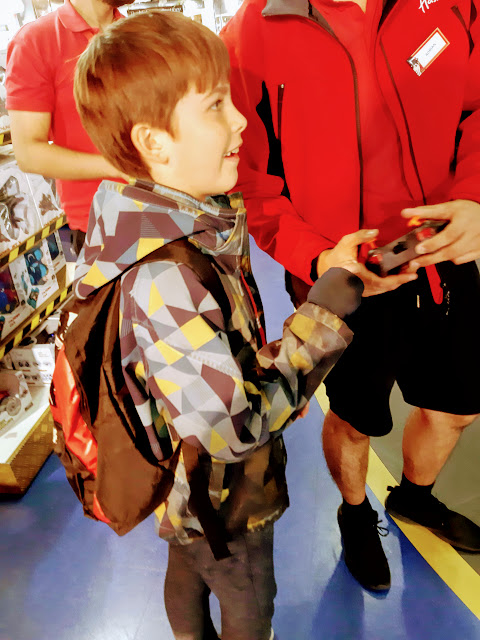 We’d just got back to the basement when two wizards declared that the Sorting Ceremony was about to begin: 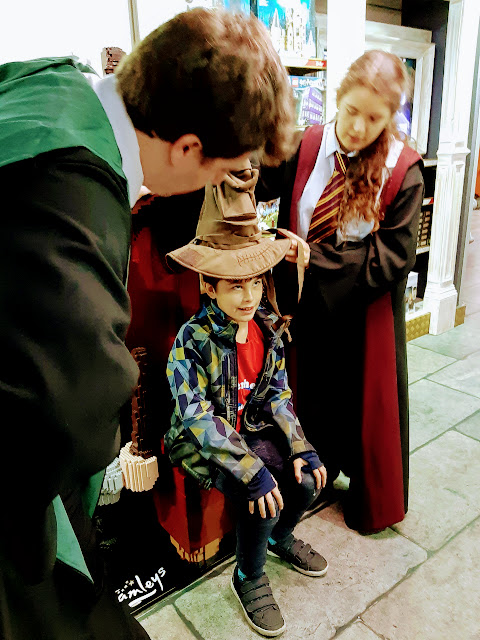 Children sat on the lego sorting hat chair and the hat sorted them mainly into Gryffindor because a high proportion of children described themselves as brave and very few used words like “evil”, “badgerlike” or “inconsequential”. Both my kids told the wizards that they were Gryffindor, though *someone* bagged himself a Ravenclaw sticker. 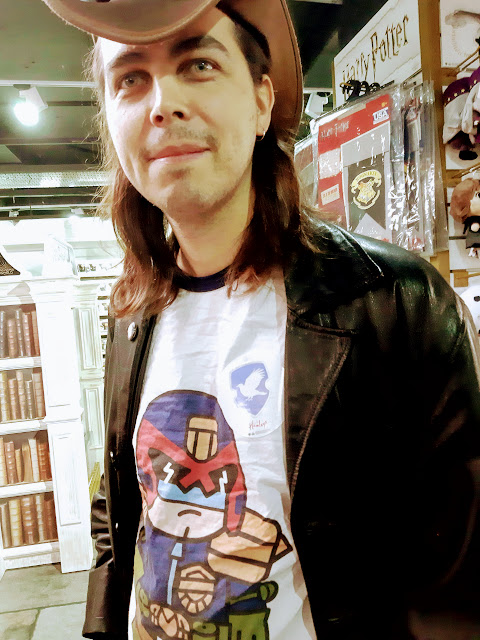 It was another half hour until the Quidditch practice  – I don’t think it was really necessary to have already spent an hour in the basement – so Eva and I wandered up to the pink and sparkly floor while Roo and Nathan mooched around the Star Wars section. Eva gasped as we got to the top of the escalator and she saw how yuvyee everything was. She really could have bought the entire floor. So she says. 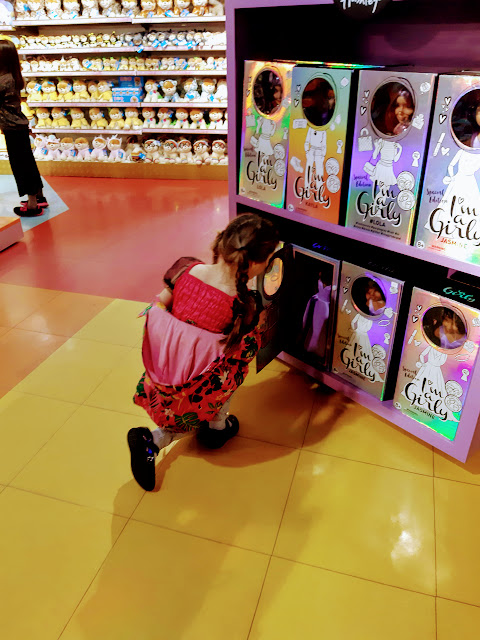 We got back down in time for Quidditch practice, which mainly involved sitting on a Nimbus 2000 identical to the one Eva has at home: 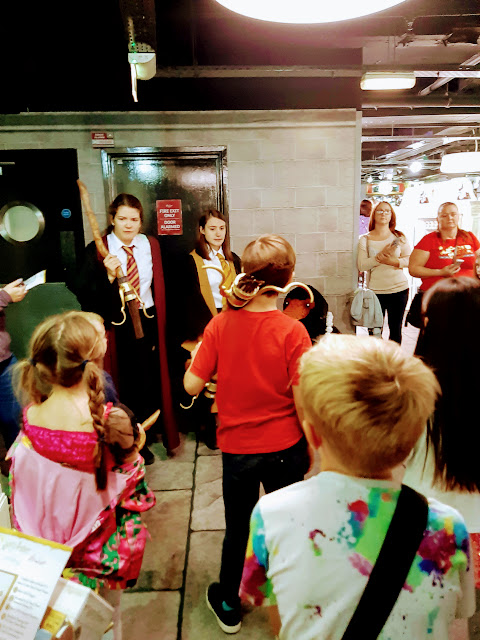 Thank goodness she didn’t bring it out with her like she did for Free Comic Book Day – it would have looked like she was shoplifting. It was bad enough that she was carrying her Harry and Ginny dolls everywhere when they were being sold in the shop: 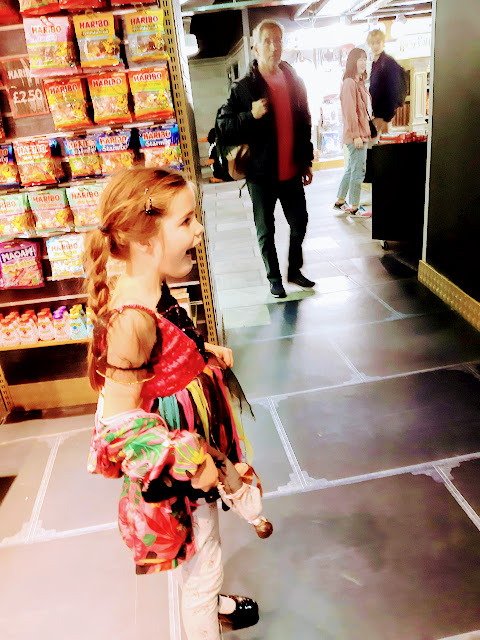 The activities concluded with a Harry Potter lucky dip and both kids were indeed lucky, scoring a HP pencil case each. It was at that point that I realised we’d had two hours entertainment and a pencil case without spending any money. I felt a twinge of guilt but hey, money is tight at the end of the summer…you need to find thrills where you can.

We had just about enough to buy some lattice fries at Leon though. I was in desperate need of some food and Leon on Carnaby Street is bigger than it looks from the outside (sorry, wrong fandom). I had a healthy chicken aioli box and some not so healthy fries. Perfick.

Just one more stop to make then and I still haven’t decided whether this was worth it or not. We were passing through Kings Cross on the way back and it made logical sense to go and have our photo taken at Platform 9 3/4. The kids were knackered though and I was full of cold so we were getting a little grouchy by then. It’s changed a lot since last time we did this – back then, Reuben was a toddler and the photo opportunity was still into an exterior wall of the station:

Now that the station is all shiny and new, it’s an integral part of the Kings Cross experience. And it was a proper experience, with a professional photographer on hand, Hogwarts scarves and even a man to make your scarf look like it’s fluttering in the breeze. It makes it worth the 40 minute queue. We didn’t buy the professional shots though. I tell you, times is hard. 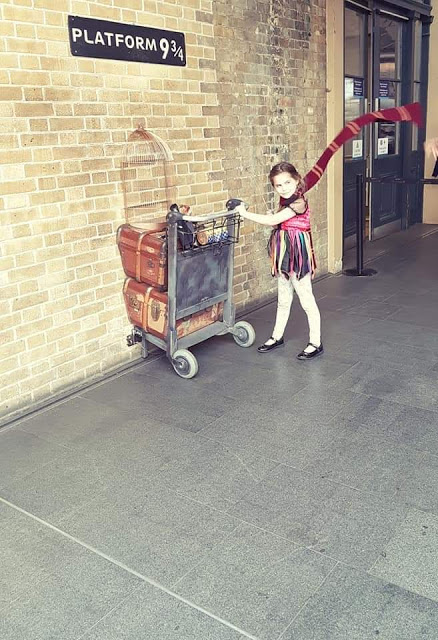 There was some altercation over a swing after that so let’s leave it there. It was a great day out and really tapped into the current obsession. The Hamleys activities have now sadly finished but go visit the shop anyway. It’s cheaper than the HP Studios experience! 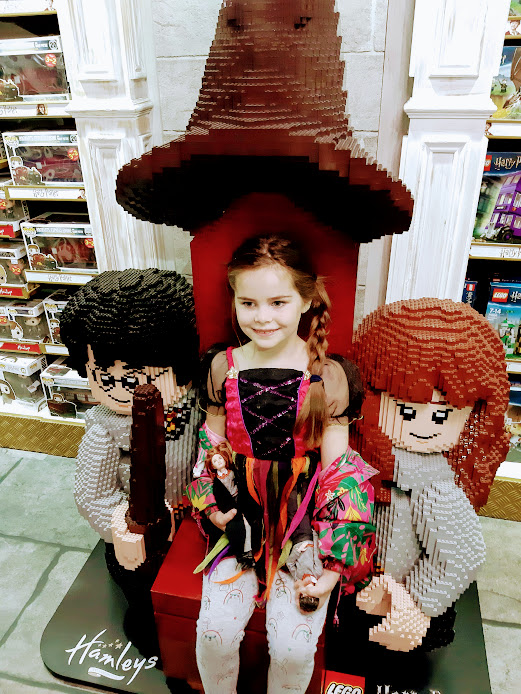