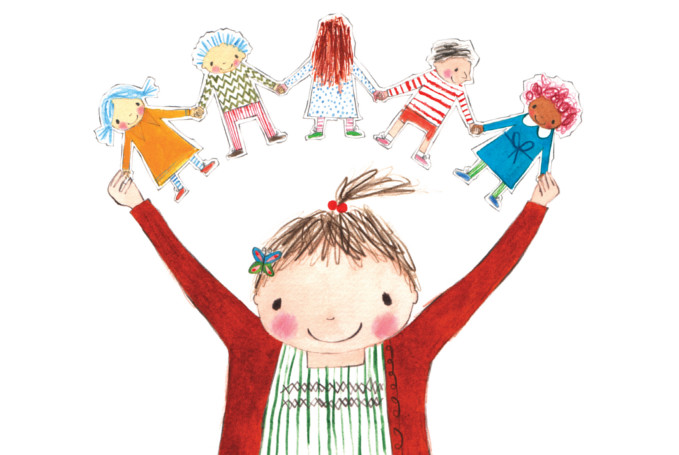 It’s been a good day. The kind of day where, if you only saw the pictures you’d think it was #perfectparenthood. But of course it wasn’t – there were brand-new coats grubbied, strops thrown and whinges whinged. Still, a combination of dog walking, lunch with friends and theatre can’t get you far wrong.

The dog isn’t ours sadly. Or even Bob’s..but Bob is dogsitting it for a week so we all got a massive playdate at Hackney Downs this morning. Needless to say, the kids were thrilled: 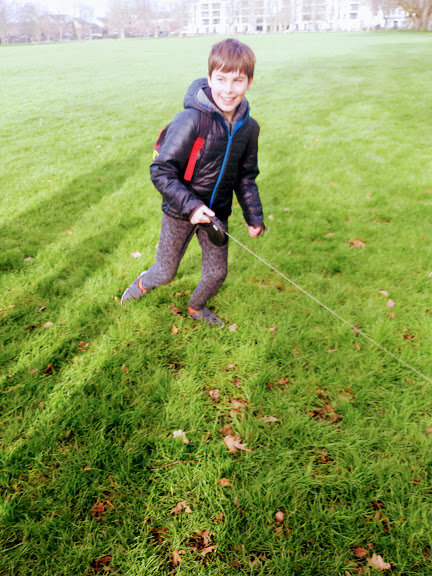 Eva and I couldn’t hang around with Bob and the dog all day though…we had places to be. Eva was whiney-tired by the time we got to Little Angel and in a contrary mood but she perked up when she saw posters for the upcoming production “Wolves in the Walls“. It’s exactly the kind of story that I’d imagine would freak her right out but no, she read it in class and thinks she’s exactly the kind of “brave 7-year-old” that should go and see it. We’ll see how she handles it if we do decide to go…

So onto “The Paper Dolls”. It’s a show for 3-8-year-olds and based on a story by Julia Donaldson so it’s fairly light on the peril which is good for Eva, whatever claims she might make about her bravery. The story revolves around Rosie, a small girl who cuts out a strong of paper dolls, names them and then makes up stories about their adventures. Rosie is played by a puppet but her mother is played by one of the puppeteers, which gives an interesting human-puppet dynamic. There are a few, 4th wall-breaking moments as the two performers (Jane Crawshaw and Andrea Sadler) whisper asides to each other but it didn’t mess with the story at all. At one point, they both come out into the audience, with a pig in pursuit of a small boy, which Eva found hilarious, and there’s a bit of audience participation when Rosie is playing a little bedtime alphabet game. It’s more interactive than other shows we’ve seen at Little Angel and worked really well for the younger audience.

The story is fairly simple but lends itself well to fantasy sequences involving tigers, crocodiles and dinosaurs. There’s a lovely moment where the front of the stage is transformed into an ocean, with fish bobbing up and down before being snapped by the crocodile. The paper dolls are in a bit of peril at this point, escaping the crocodile in their pea-green boat (not sure if that was a deliberate Owl and Pussycat reference but I liked it)…but there is never anything too scary. Which is why the ending is a bit shocking, with Rosie’s older brother doing what older brothers are wont to do and wrecking her game. Eva looked a bit distressed at this and sobbed a little as Rosie sat on a swing, remembering all the adventures the dolls had been on.

There is a melancholic feel to the end that probably doesn’t affect the youngest kids but does hit home with the adults and the very sensitive ones (yes, still talking about Eva). There are themes of loss and transience but also a nice inter-generational moment as Rosie grows up and makes paper dolls with her own daughter. The music and lighting as Rosie is swinging are so poignant that it might well bring a tear to your eye but in a good way.

Mostly though, this is a light and enjoyable show, charmingly told and pacey. The quirks of the dolls – the one with the two noses especially – still had Eva giggling at bedtime and the names of the dolls are pleasingly rhythmical, as you’d expect from such a master storyteller. “Ticky, Tacky, Jackie The Backie, Jim With Two Noses and Jo With The Bow”.

So, another lovely production from Little Angel. I’d be curious to see the wolves though I’m sure Eva is not nearly as brave as she says, if the fate of the paper dolls reduces her to tears.  I bought her the book though and she seems to really like it. She’s a contrary one.

“The Paper Dolls” is on now at Little Angel until 18th April. For tickets and more info, click here.

Disclaimer: I received free tickets in return for a review but all opinions remain honest and my own. 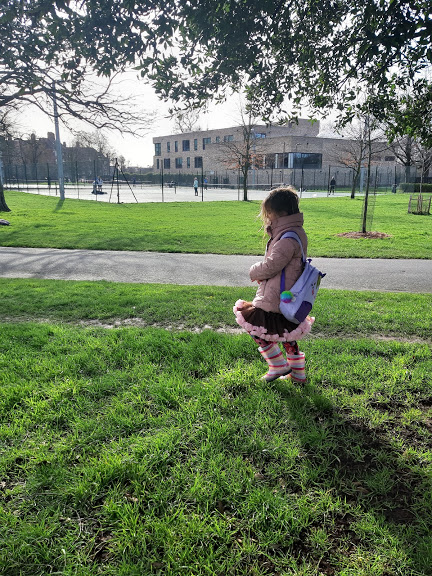