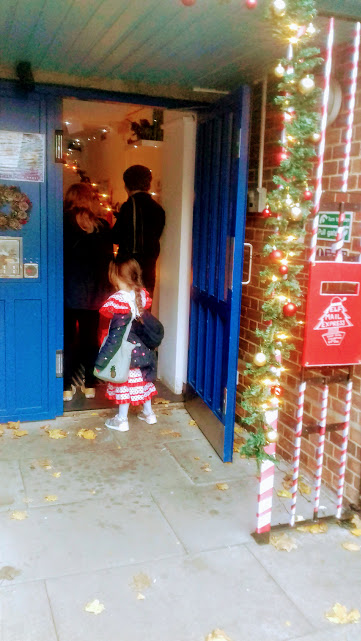 It might seem a tad early to talk about Christmas but I’ve been working hard on Christmas music since September and we had our first Christmas choir gig yesterday. So I think I’m OK to go to a show about Santa’s elves, full of snow and candy canes. It was also extremely convenient that we’d just been at church in Canonbury so were only a short saunter away from the Little Angel Studios (a separate venue to the theatre we went to for “The Everywhere Bear”)

Eva squealed with delight at the front of the studios, which were decorated with baubles and ribbons. As we walked through to the studio, the corridors were hung with letters to Santa, a key motif of the show we were about to watch. The studio itself had a set made of icebergs and icicles and elves were wandering around the audience, chatting to kids. It may be November, but it sure was Christmassy in there.

The show started with a shadow-puppet style film, telling the story of two elves who collected the letters to Santa and delivered them to the North Pole. Then we were thrown into the action with our two heroes – Tatty and Pumpkin – as they tumbled out of their sleigh and had to find their way home with the letters in time for Christmas Eve.

It was a simple enough plot but with a twist – at several points, the audience had to choose between two different options and that determined the path the show took. Just like those “Choose Your Own Adventure” books we had in the 80s. I suspect that every possible path would have led to a happy ending cause it would have been a very different show if the elves had genuinely faced the prospect of freezing to death or being eaten by a troll. With a show aimed at 3-8 year olds, it was always going to work out well.

That troll, though. He had Eva doubting it. She’s easily spooked and the idea of the friendly elves being eaten was a bit much for her. I apologise to anyone nearby us for the ear-piercing scream. 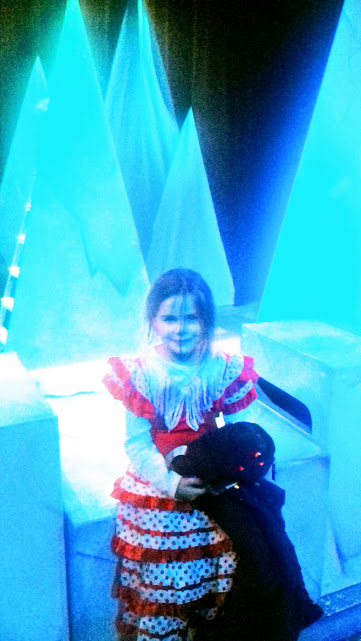 It did work out well though and she said she yuved the show in the end. She was really keen on the audience participation elements and said that her favourite character was Tatty because of all the “really funny jokes and riddles” she told. Trolls aside, it was an easy watch – light on peril and big on preschool-friendly laughs. There were a variety of sets as the stage blocks moved around to make a frozen lake, a bridge and a sleigh. The interaction with the kids was well handled despite a few heckles and both actors seemed to be having a great time.  It’s a delightful Christmas show, ideal for the smaller child in your life.

Disclaimer: I received free tickets in exchange for a review. All opinions remain honest and my own.