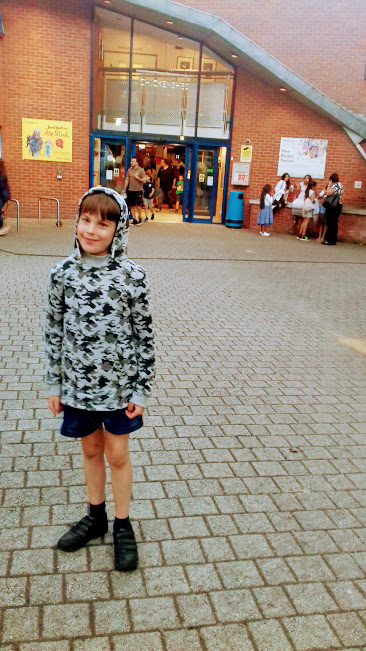 This is the third time we’ve been to an evening show at Chickenshed and, seeing as the last two posts started with a bit of what I loving call “tube geekery”, I see no reason to deviate this time. Cause we got the tube bit spot on! Roo and I were in Walthamstow for drama club, met Nathan on the platform to hand Eva over and then we got the Vic line to Finsbury Park, one stop down the Picc line to Arsenal and then an easy change to go back up the Picc line to Southgate. We’d nailed it for once!

Except then I screwed the bus bit up. I thought we were on the wrong bus but we weren’t – the 299 had alarmed me by taking a right turn off the road that Chickenshed is on but it would have come back round to the theatre if I hadn’t panicked and made us jump off. That resulted in a mile-ish power walk, which wasn’t my greatest idea given we were avoiding the tricky change at Finsbury Park because of my sore leg. Whoops.

Ah well, we got there on time and to get home we used the excellent Southgate Cars who texted us the car details just as we came out of the show. So another mission successfully completed by the Go-Glitchers.

I’ll talk about the show now. It was the adaptation of classic children’s novel “Stig of the Dump” by the Chickenshed Children’s and Youth Theatre groups, as part of the New Routes Festival. It was an 8pm start but only an hour long and on a midsummer night like this I don’t think a late night hurts my 9(!!) year old. The director introduced the piece by telling us it hadn’t really had a full run through yet, which provoked a nervous laugh around the auditorium, but it actually went pretty smoothly. There was the odd technical hitch where a microphone wasn’t turned on at the right time or a song where the timing went slightly out but as a choir leader and worship leader, I can safely say that PA issues and timing issues happen to us all. 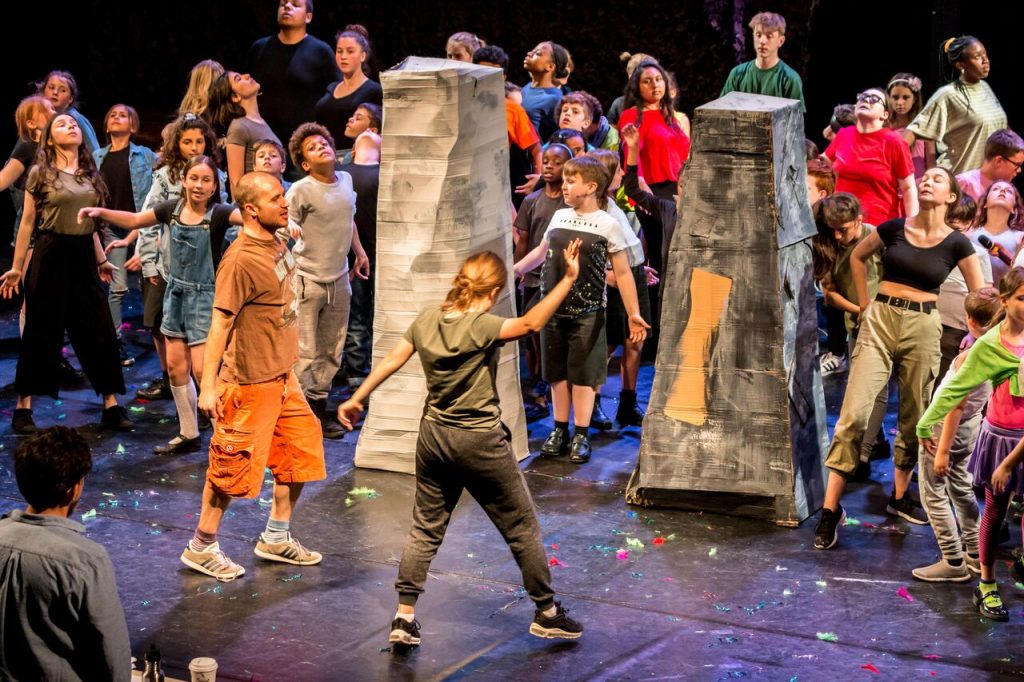 In true Chickenshed style, it was a massive ensemble piece with around 100 children and young people performing. The cast was truly diverse and inclusive – one child was in a wheelchair and another was wearing headphones as I presume he had some sensory stuff going on. Some of these performers had buddies with them, who dressed the same and made sure they were in the right place at the right time. I’ve said it before but it’s so lovely to see performers who don’t fit the norm seamlessly woven into a large ensemble without fuss or making an issue of it.

There were a few different boys playing Barney, as well as a group of different people representing Stig, but it was suprisingly smooth and easy to follow. The Barneys all wore the same uniform and at times appeared together, which was very effective – one Barney was talking about his adventures with Stig, while the others were enacting them. The Stigs worked well together too, flowing and moving as one to invoke the primal essence of Stig rather than being pinned down to one physical form. There’s a touch of ambiguity over whether Stig is real or not but that’s straight from the book.

Another thing straight from the book is the episodic plot, which could be tricky in play form as there’s no one strong narrative. But the heart of it is the relationship between the two main characters and the leopards and jamjars that frame these interactions are largely incidental. As with all literature from the 50s and 60s, there are things which don’t translate to a modern North London audience – I swear I heard someone next to me tut when Barney proposed fox hunting – but you have to consider it in the context it was written in.

Some of my favourite bits were the set pieces, with the whole cast singing and dancing together. It’s an impressive wall of sound when 100 singers are all in unison and the opening number about “stacks of sticks” was a strong beginning to the show. The fancy dress party too was a welcome moment of outright comedy in among some of the more introspective scenes and Reuben laughed out loud when the hostess fainted, revealing her neon pink tights. There’s a great dance and then the cast come together to repeat the “Leopard Hunt” chant which builds to a crescendo and then freezes…it was all very effective. But there were some lovely quieter moments too, with floppy-haired Barney and his sister Lou sitting back to back reading newspapers. The contrast between the loud and the quiet really kept the show interesting.

So, a charming and short piece of theatre which was pretty well suited to Roo as he’d read the book in class. I think it’s recommended for 5+ and I think Eva might have enjoyed it too but I’m always cautious with her as she’s just a sensitive soul. It’s only running for another three performances but there’s plenty more going on in the New Routes Festival. Find out more here.

Disclaimer: I received free tickets in exchange for a review. All opinions remain honest and my own. 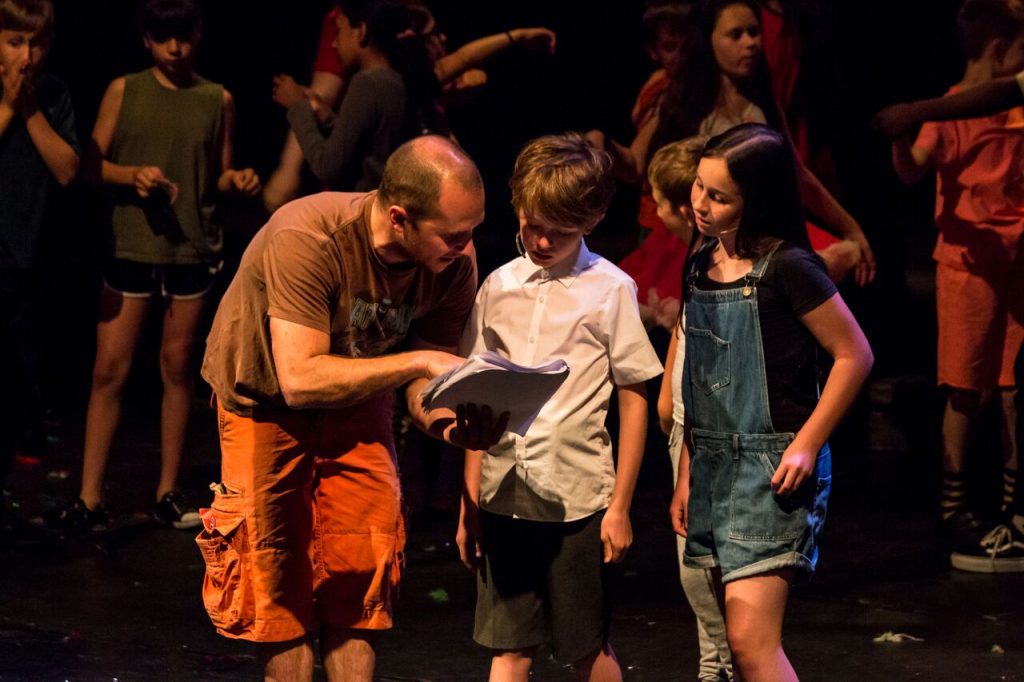