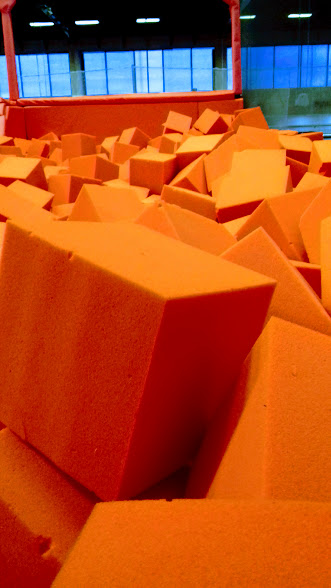 Yes, that title is a bit of a mouthful. As befits a very busy day. If I fall asleep midway through the post then …well, you’ll probably notice no difference in the coherence of my writing. It’ll probably improve if anything.

So today was the day we decided to leave Waltham Forest for only the second time in a week or so. The original plan was a bike ride to Walthamstow but the unfriendly weather made us rethink and it was this combination of circumstances that made us jump on the Victoria line to Finsbury Park, along with Roo’s friend C and his Mum M. Roo and I had been to Finsbury Park with them once before – around this time last year – but I never got round to blogging it because of undoubtedly sound reasons at the time. Some of the photos I use in this post might be from that trip rather than this one but I won’t tell you which is which. Therein lies the mystery.

Our actual destination was the new trampoline park at the Sobell Centre, which church friends had recommended. Reuben always enjoys a trip to the Better Extreme park at the Feel Good Centre but this one looked bigger and better and quite frankly, we needed a change of scene. We got there in time for the 10am session, which is inexplicably much cheaper than the rest of the day and then we went upstairs to inexplicably go back downstairs again. Like most experiences with Better Leisure, there were confusing elements. 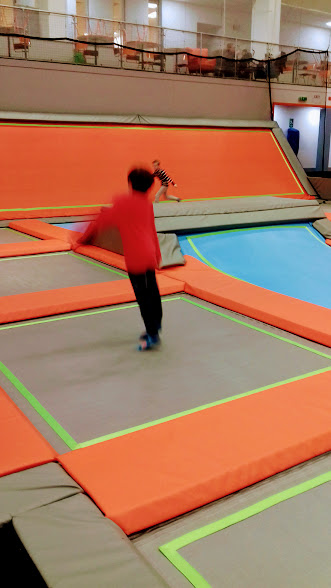 I’ll talk you through it. The lockers for the trampoline park are downstairs as you go in, just past the reception gates and the coffee corner. If you’re trampolining, travelling light is pretty essential so we put everything barring phones and water bottles in there. Then we went up the stairs to the registration/assembly point where you collect any socks you’ve ordered (the kids and I brought our own from previous trampolining trips) and then they direct you off down a corridor to the Briefing Room, which is where you watch the safety video. Then you come back through the assembly point and down a slope into the trampoline park itself. It all makes sense when you’re there. More or less.

But let’s go back to the Briefing Room for a moment. Because that’s where it all started to unravel for Eva.

This has happened before – Nathan took the pair of them to the Feel Good Centre, Eva watched the safety video and totally freaked out and wouldn’t go on the trampolines at all until five minutes before the end. Then, predictably, she loved it and didn’t want to leave. Next time we went it was for a birthday party and she bounced through the whole thing, no questions asked. On the tube on the way in, she was enthusing to C about how “super fun” it all was so I didn’t think we’d have a problem.

How wrong could I be? She watched the briefing and flatly refused to participate at all. She literally sat on the side for pretty much the whole session, not responding to any of my threats, bribes and cajolements. The girl’s feet did not touch a trampoline the whole time we were there, despite spending ages that morning trying to find a matching pair of trampolining socks in which to encase them. At around 45 minutes in, she agreed to try out the foam pit by the pugle stick fighting area but no sooner had she climbed in than we were told it wasn’t for playing in, only for the pugle fighters and we had to go to the big foam pit. She got to that one and freaked out again by the idea that she might need to touch a trampoline to get into it.

A few minutes after that, I realised that there was a section for smaller kids on the upper level and she agreed to go there “to see what the babies were doing”. It meant leaving Roo but he was fine and having a grand time, so we climbed up there and she did actually spend a minute or two in the foam pit there before the session ended. Totally worth the time, money and effort to get her there.

Let’s focus on Roo’s experience instead then, as he was much more gratifying. He enjoyed the trampolines – vast numbers of them – and the long walls to bounce off. He went to the top of this slide: 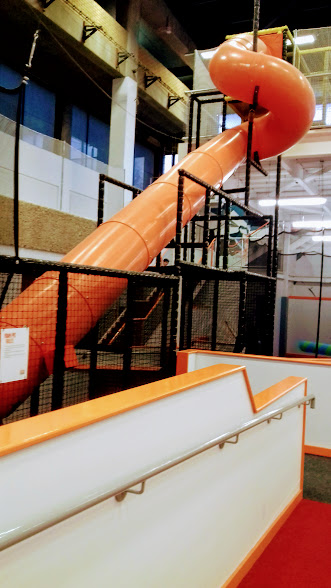 But decided it against it at the last minute and just settled for plunging into the foam pit instead.  He and C enjoyed doing the pugle fighting:

And they spent some time on the dodgeball court. But he says his favourite thing was the one I found most terrifying – the sweeper, which kids had to either duck under or jump over. He nailed the ducking under: 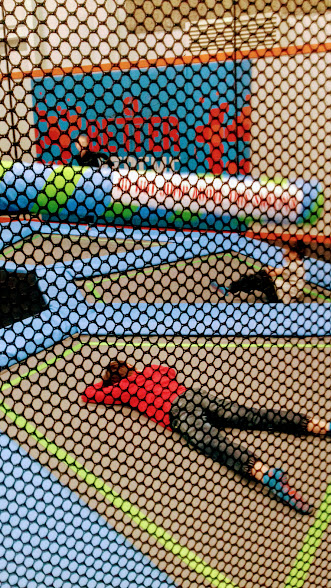 But the jumping over was tricky and he only managed it in a leap-frog kinda style. He thought was “awesome” though. I kept thinking he was going to get whacked in the head and it’s a justifiable fear.

So Roo and C had a great time. M and I did some bouncing on the trampolines of our own and some relaxing in the foam pits. M even had to get rescued by the official foam pit rescue pole:

It’s worth saying that I had to pay as a supervising adult, which is different to how it was last time we went to the Feel Good Centre. M chose to pay so she could come and join in but as C is older than 7, she didn’t have to. I needed to as I was taking in an under 7 but wouldn’t have had to if it was only Roo I was taking. Oh, the irony of paying to supervise a child who did nothing riskier than sitting. Lucky I’m not bitter.

I think this photo rather sums up the experience:

And this one shows you the state of the boy after an hour’s exertion:

This is while we were recovering in the cafe with slush puppies for the kids and coffee for the adults which is somehow better than the coffee at the Feel Good Centre. Not sure how as it seems to be the same machine and the same brand but maybe they’ve picked the right soya milk?

After all that leisure centre air, we needed to get outside and Finsbury Park was beckoning. We picked up some food and also some pepperamis at the Tesco Metro and walked up to the climbing rocks in the park, where the kids perched on the top of the pile and ate their sandwiches. It wasn’t exactly picnic weather but we’re hardy.

It was around this time that we fell victim to a form of distraction theft. One by one, the children came up to us and performed a “silly dance” while one of the others snuck behind us and stole something from our bags. Subtle they are not. Luckily, they only got away with the pepperamis and their own coats. Later, Eva was to drop the pepperami in the mud and still try to eat it. Pretty much all of Eva went in the mud:

It’s been a very muddy holidays so far.

We moved on to the playground at the top of the hill. In fact, there were two or three playgrounds at the top of the hill. Enough to keep the kids entertained for another hour or two while M sneaked to the cafe to get tea for us both. We’d already spent money on the kids at Sobell so didn’t fancy another full on cafe trip. We went there last time though and it was very pleasant:

It also has toilets on the outside, though the mens’ were out of order yesterday and the women’s could have been cleaner. Eva yuvved them though because they had sparkly tiles and pink toilet doors. She’s easily pleased.

She was also pleased with this photo of herself, which she made me take:

The playground is quite big,with a couple of roundabouts, some nicely challenging climbing frames and a scenic view over the lake: 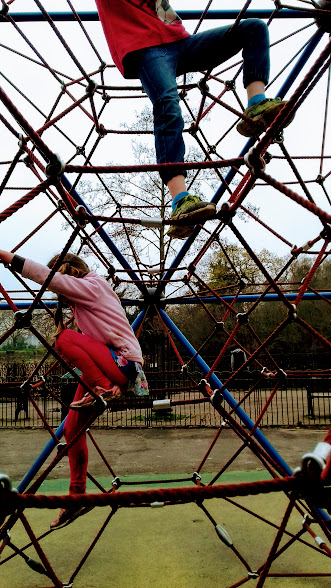 Of course, as with every park it would have been nicer if the weather had actually resembled Spring rather than a kind of drizzly January. But it was a grand trip out and we made it back to HP before the kids started fighting. Just about anyway. 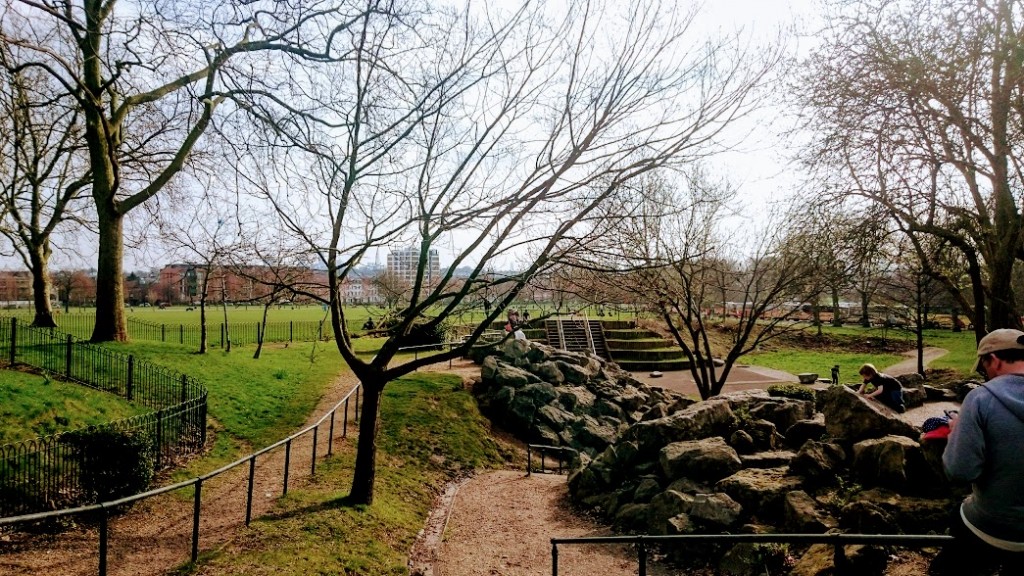