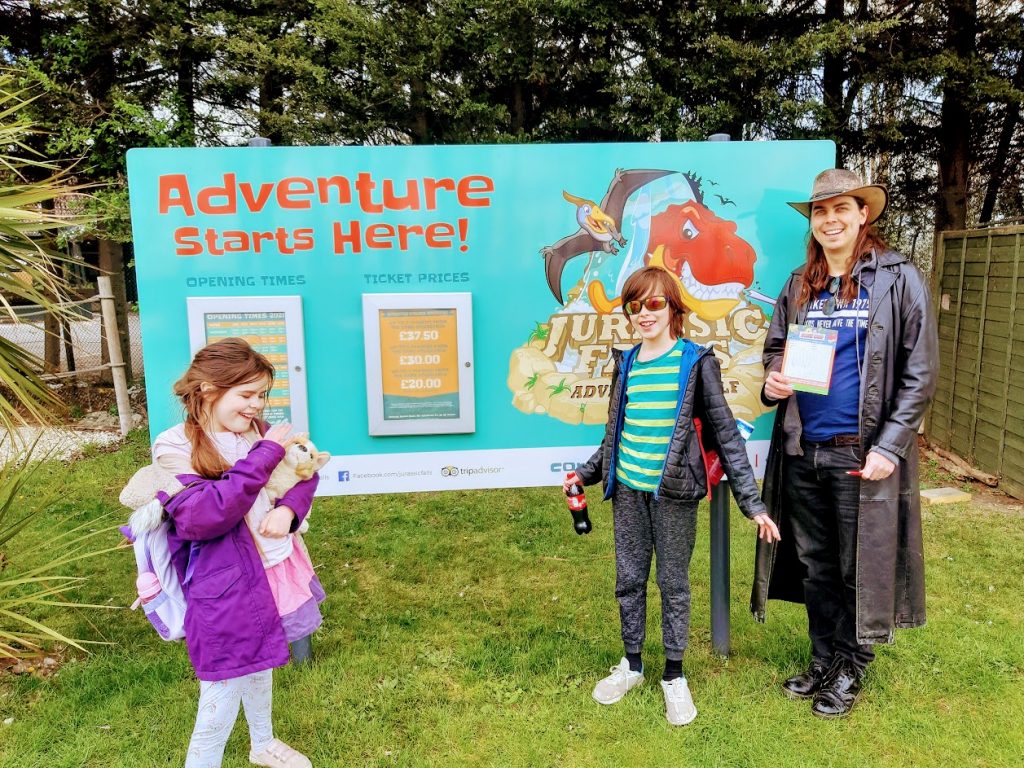 Going far away was one of many things that was failing to raise any kind of enthusiasm. I think we’ve all got a touch of Stockholm Syndrome from being cooped up for so long. So we decided to go somewhere that was only the slightest toe-length outside Highams Park. We’d driven past the dinosaurs a million times on the North Circular and always said that it would be good to actually visit one day. Today was that day. It was so close by that it was barely worth driving but the location didn’t seem particularly pedestrian-friendly and I wasn’t sure exactly how we would get there on foot without having to either cross the North Circular or walk alongside it at some point. So, a 5 minute drive it was. Accompanied by a slightly hairy sharp left turn off aforementioned circular when we didn’t really have the opportunity to slow down before taking the corner. It’s set up to drive to but the driving is every so slightly scary. There’s a decent sized car park though. 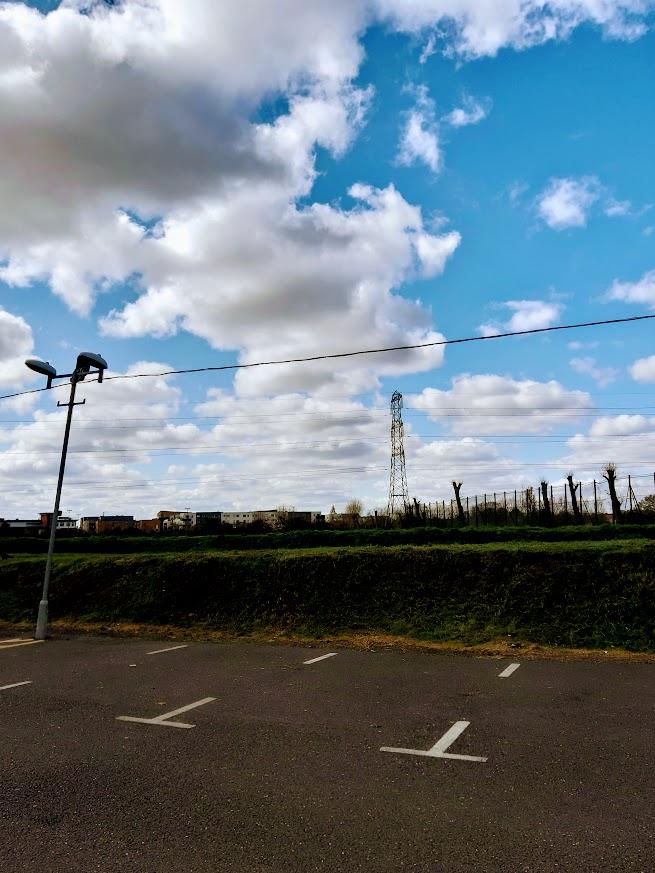 Obviously, with These Times you need to book ahead for everything and I’d definitely advise booking ahead for golf as I think they were sold out of slots. It certainly seemed busy-ish. We had a 10:30 slot, showed our barcode to the friendly guy at the entrance and he gave us our clubs. Then we had to mask up to walk through a small indoor bit, where we got a pencil and score card and a ball each. The kids had shades of purple – Eva’s matched her rucksack, which was quite pleasing – and Nathan and I had shades of green. It was all very efficient and we took our masks back off as soon as we were through the building. They’re currently only allowing players to go round in household groups and the natural pattern of one group per hole made it easy to distance. 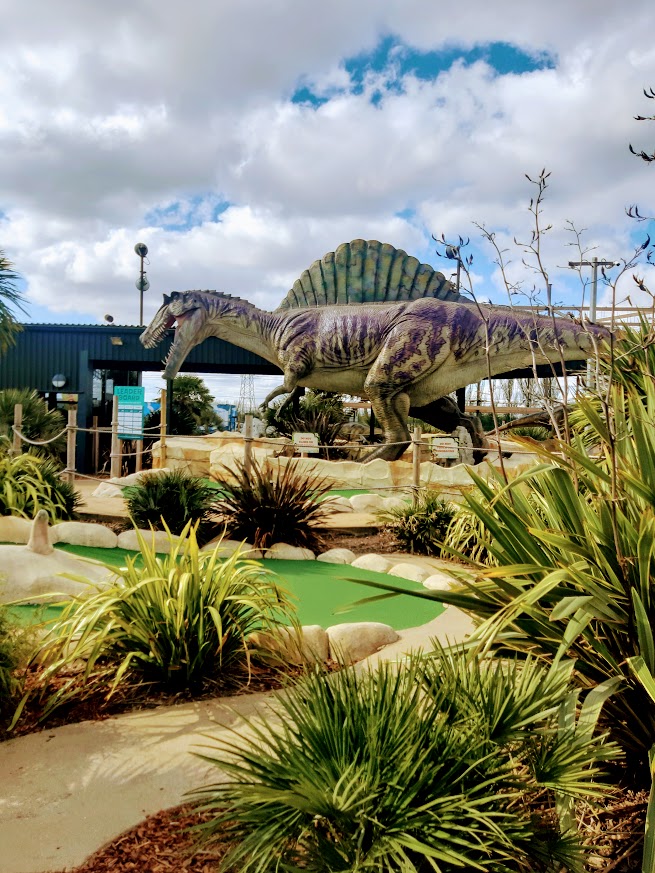 The less easy bit was striking a balance between actually playing the game and keeping the kids from melting down. I issued a decree that we wouldn’t be too strict about the rules and it didn’t matter if I shuffled Eva’s ball a tad closer to the hole on occasion. The main aim was to all still be speaking to each other by the 18th hole, which we were pretty much were. I also told the kids that the winner wasn’t allowed to brag too much so it took the competitive edge off a bit. Dagnam, I just wanted to give us the best possible chance of actually having a nice time. 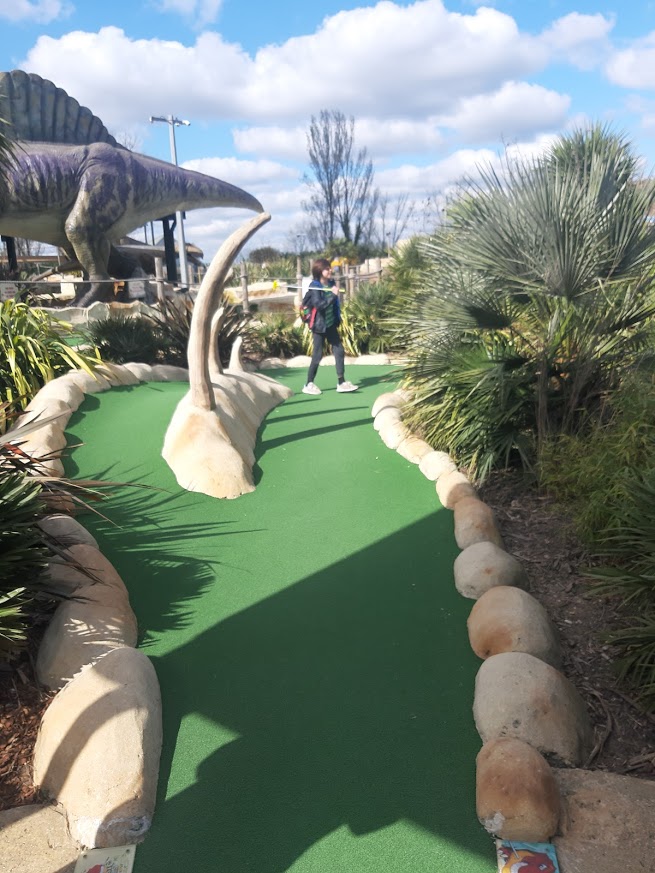 It was pretty hard not to brag though, when I got the first three holes in 2 shots each. I’m normally terrible at crazy golf so I have no idea how that happened. I assumed Nathan was going to win (spoiler – he did, but only by a couple of points) and that the rest of us would all throw our clubs down and storm off crying at some point due to our genetic lack of co-ordination. But no, it went surprisingly well. There was one hole that took me 10 shots and there were a few where Eva got stressed so we either let her start again or just plain cheated to help her….but most holes we managed to do in a fairly efficient way. We did let the group behind us overtake around Hole 9 because they were even more efficient than we were…but that was shortly after one of those stressy holes and Eva needed a biscuit and a minute to breathe anyway. 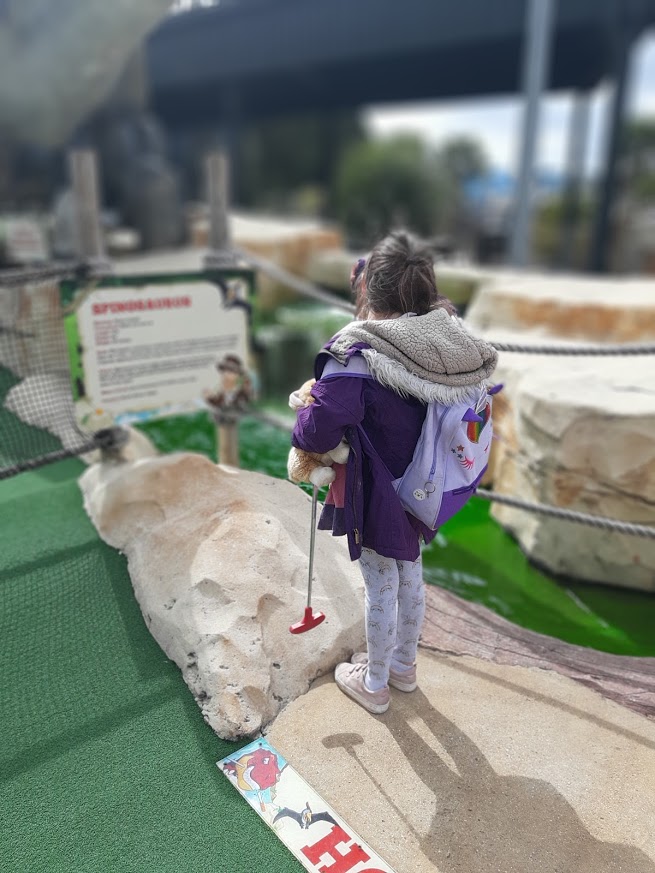 It’s a very compact course but well laid out so you never have to cross anyone else’s path unless they’re overtaking. The dinosaurs are largely incidental but Reuben would have loved it when he was 4 and in his dino phase. I kinda miss that phase. 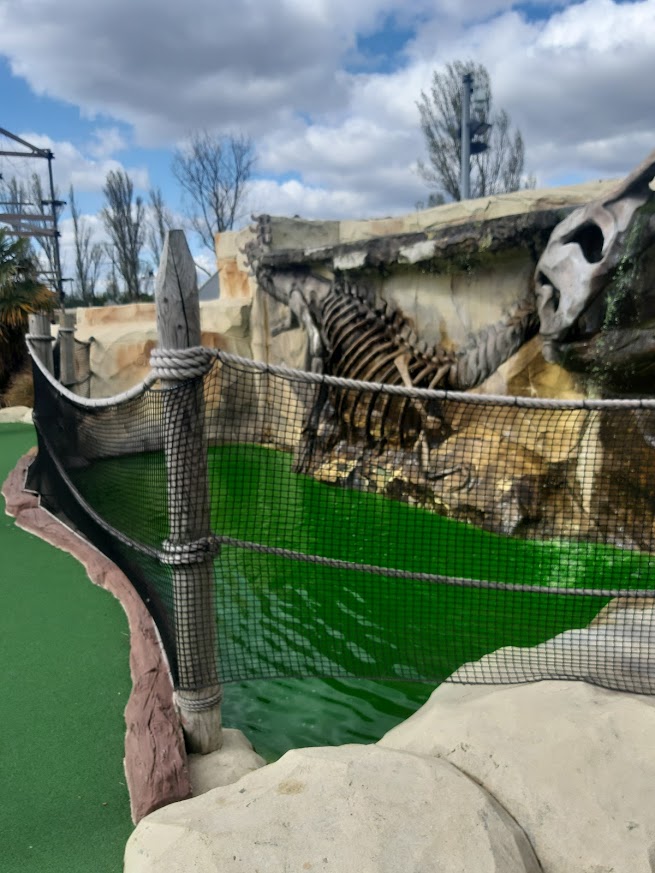 You never forget that you are right next to the North Circular. It’s a bit noisy and I can’t help wondering whether anyone has ever managed to chip a ball right over the fence and into a passing windscreen. Hopefully not. 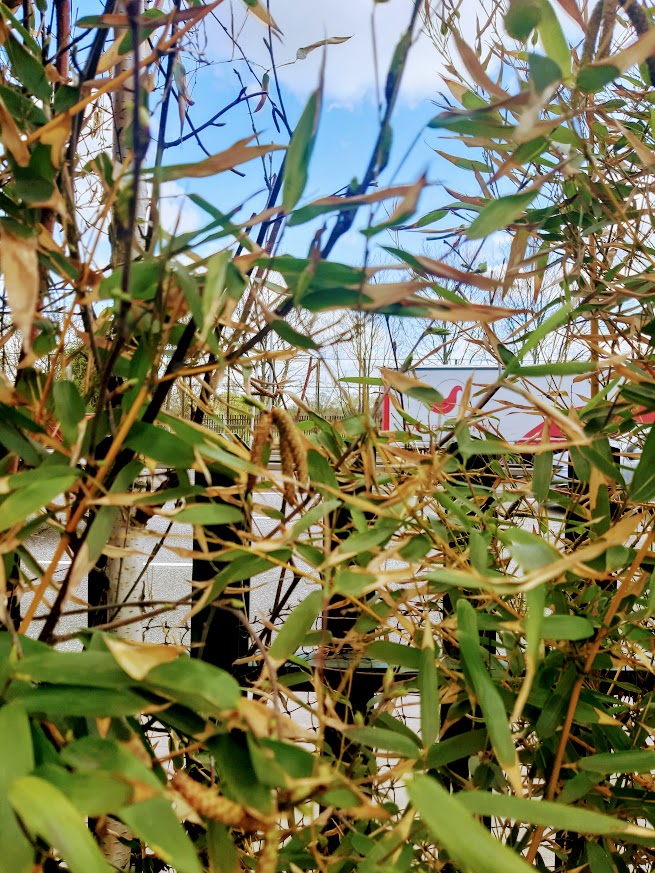 There’s also no coffee, which is fine cause we brought our own but definitely something for tired parents to be aware of. The indoor bit has a refreshment stand with slushies and other cold drinks plus a few packets of sweets but no hot drinks as far as I could see. There’s a Turkish restaurant next door which would be a nice lunch stop in more normal times. Turkish food is one thing that Eva actually eats so that might just work for us. 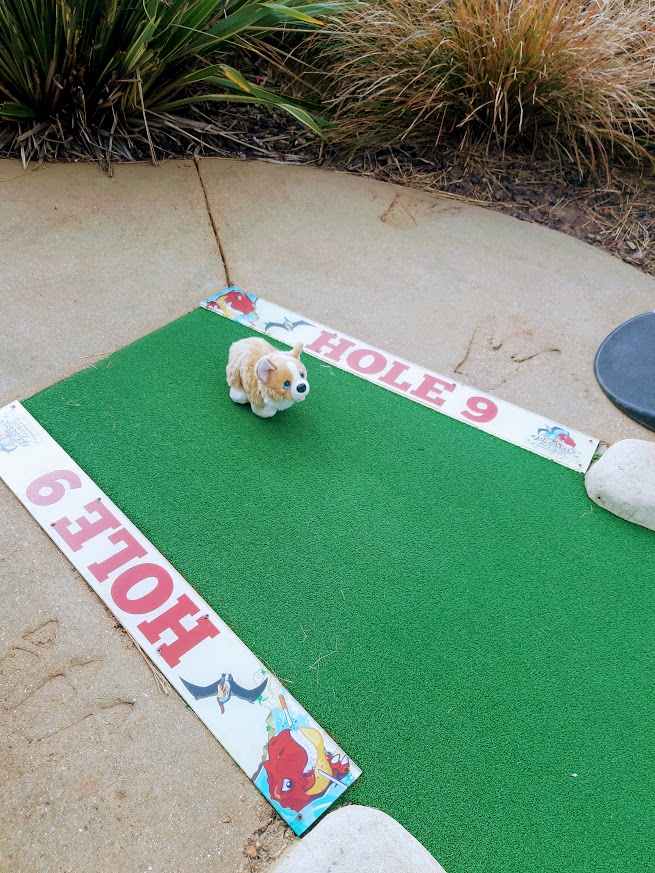 Carrying coffee cups, clubs and scorecards round can be a little cumbersome especially when we also had to carry Eva’s cuddly corgi “Summer”. It was Summer’s birthday, you see, so she had to come with us. Luckily the course was dog friendly: 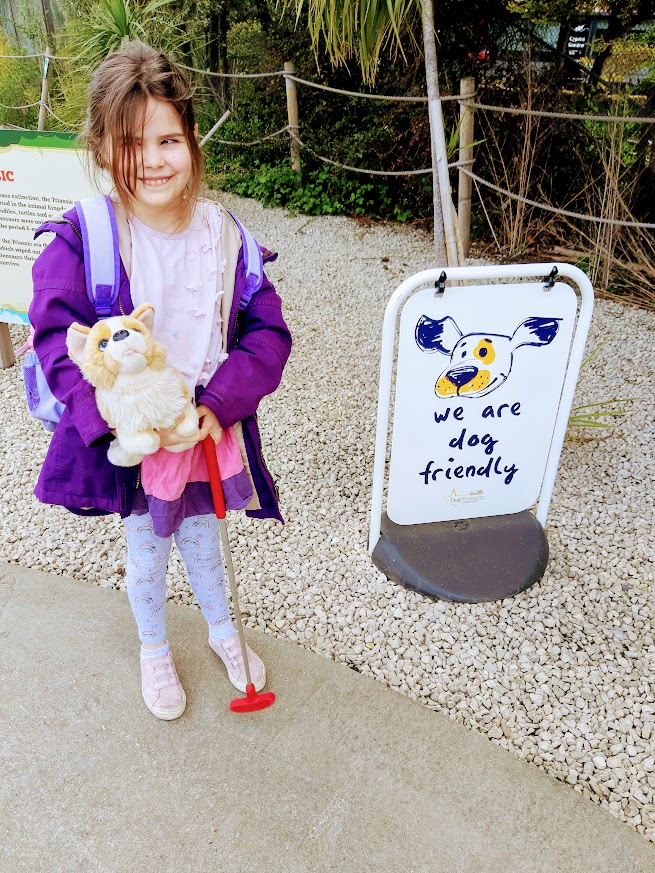 There are a few tricky parts of the course, especially the last hole where your ball is liable to fall into the disturbingly neon-green stream half way through the hole: 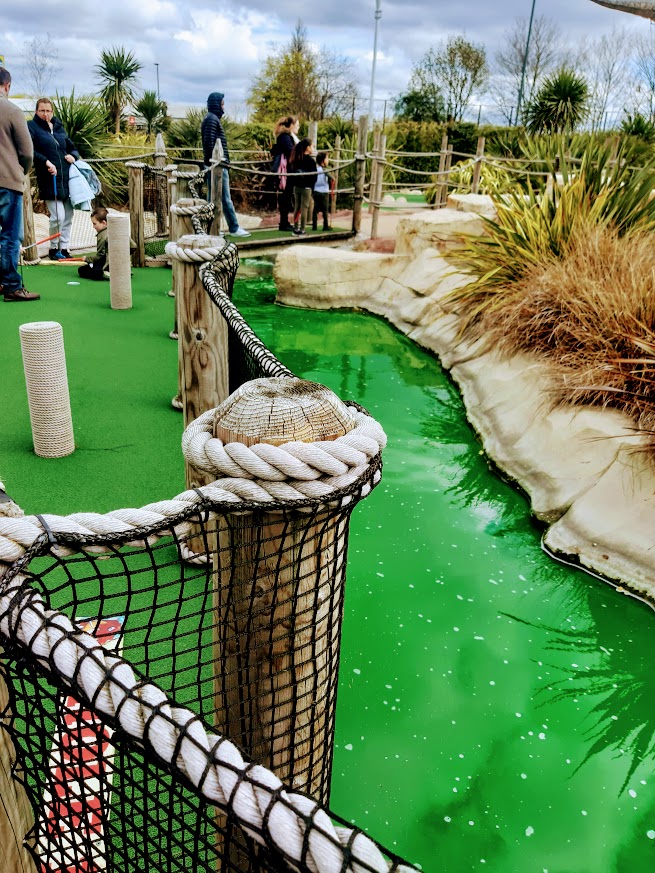 Reuben’s ball went in there first time so we had to fish it out and somehow it then ended up in a different neon-green stream. So we advised Reuben to hit the ball a little harder next time, at which point he hit it so hard that it went off the end of Hole 18, over Hole 1 and almost through the fence into the car park. It’s all about balance.

Talking of Reuben tho, here’s his victory stance after getting a hole in one: 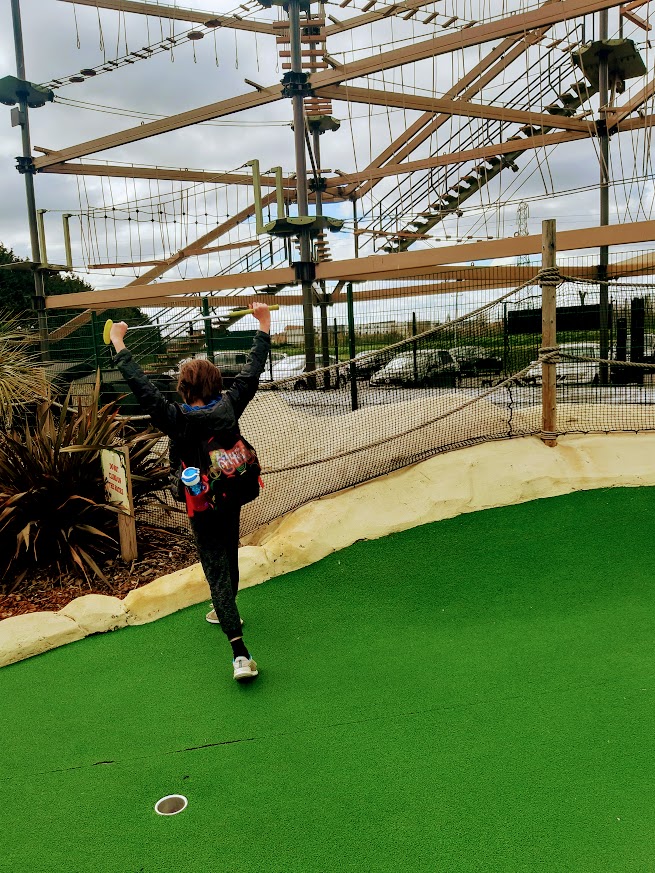 It’s a bit Breakfast Club, isn’t it? I’m sure Nathan would want me to tell you that he got a couple of holes in one too so there you go, I told you. I never did get a hole in one but I got quite a few twos and threes, which I was pretty pleased with. 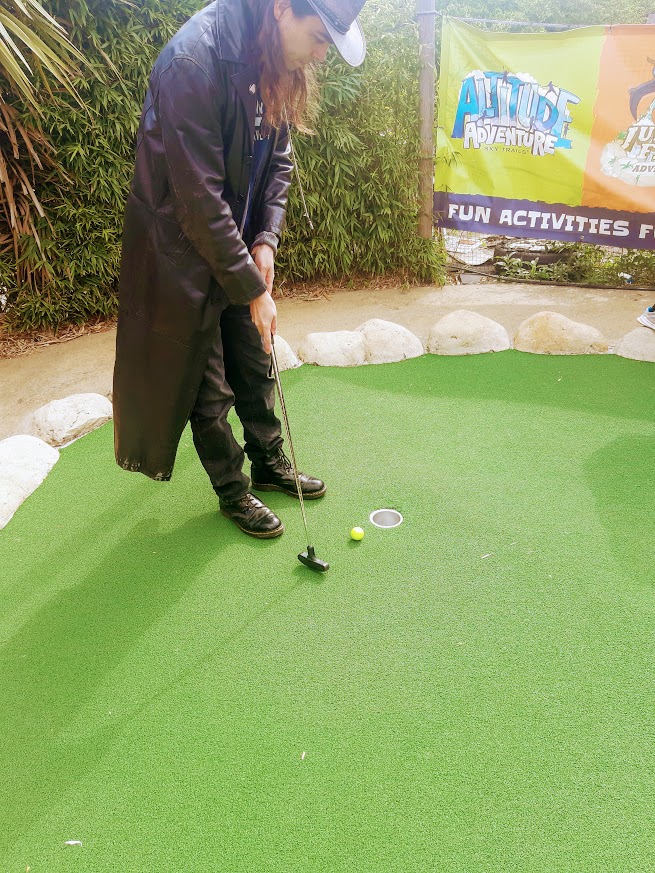 Eva, meanwhile, would like me to tell you that she got a slushie that was half orange and half lime. Here it is: 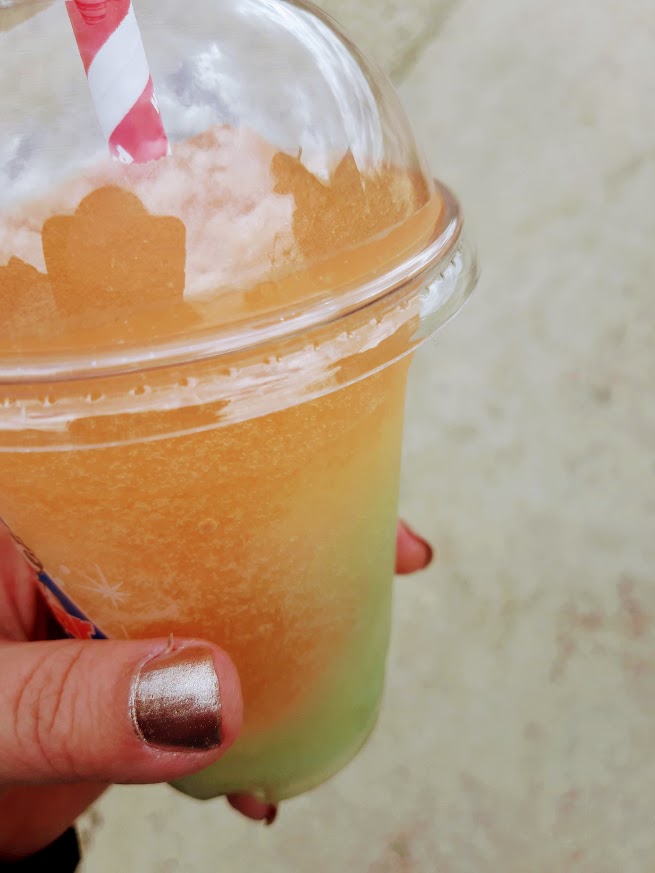 The tricky bits on the course were nothing compared to the trickiness of the drive home. A hard left off the North Circular is a challenge but a hard left back onto it even more so. Credit to Nathan that he made it with only a small amount of tyre screech. But then having to deal with the “part time traffic lights” roundabout straight afterwards might be an ask too far. Maybe we should just walk next time… 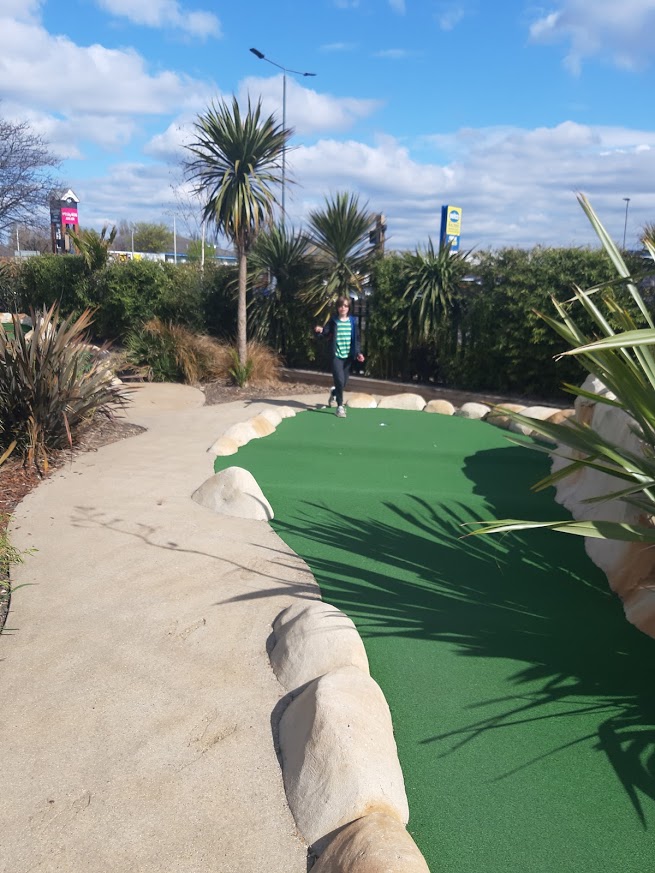 This entry was posted in Token attempts at exercise (leisure centres) and tagged dinosaurs, East London, golf. Bookmark the permalink.