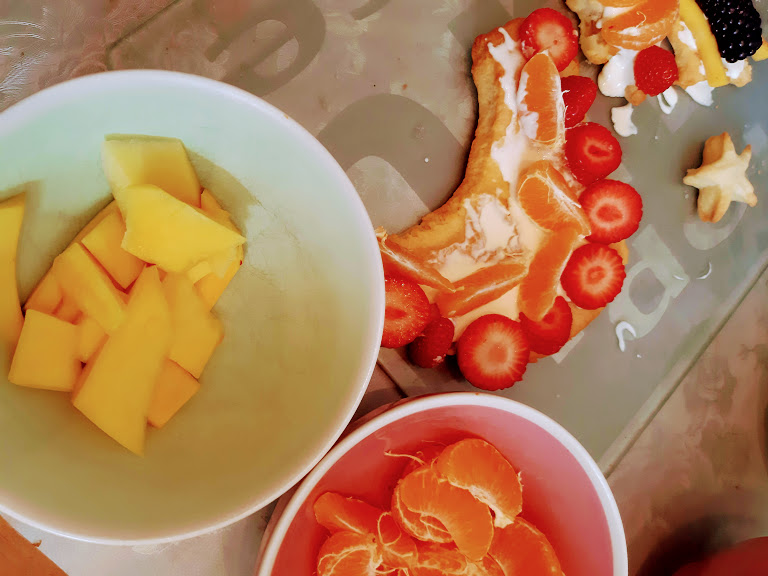 You can tell that lockdown fever is really starting to get to me when I agree to activities that Eva’s organised. True, we’re not that locked down any more but a quick look through my Google location history for last week suggested that I spent 97% of my time at home, which is still enough to drive me crazy. Just because we can go out now doesn’t mean there is much to go out and do, with all the normal summer events cancelled and so many places still shut up.

So I asked Eva what she wanted to do this weekend, hoping that it might involve coffee and socialising. She disappeared upstairs for a bit and re-emerged, clutching a copy of “Sparkle World” magazine, open at a recipe for “Rainbow Pizza”. Now, you might think that “Rainbow Pizza” is a euphemism akin to Lister’s “Jackson Pollock” but no, it’s more of a recipe for making your parents spend a fortune on fruit that is then mangled into rainbow shapes on pastry.

I’ve done food blogging once before and it too involved fruit that was very, very touched by human hands. But Eva’s twice as old now as she was then so maybe this time, we’d win. So, first step was a trip to Tesco with both kids, which I’d not attempted since lockdown began. But the queuing time was only a few minutes and the one-way system has disappeared so it was a bit less daunting a prospect than it had been previously. At some point, Reuben also disappeared and it was in the queue that I found him after raising a slightly unnecessary alarm. He stuck with us through a few minutes of fruit-buying before sacking us off to buy himself pic n mix and wander home.

Eva and I then bought a basketful of fruit, which was heavier than I could ever have imagined. 5 bananas, a large mango, a bag of clementines, a punnet of strawberries, a punnet of blackberries, a packet of grapes and a bag of kiwis. Luckily, I had this colour-coded shopping list to keep me on track with what we needed.

The next challenge was lugging it all home, via a visit to Liz at Ziggys because she doesn’t like me going to Tesco without saying hello.

Once we got home, we unrolled the pastry which turned out to be *too* cold because it was brittle and snapped off a lot. So I had to stick it all together with a rolling pin, which also made it stick to the chopping board. It was like a bad technical on Bake Off.

The Eva cut out a tiny rainbow shape, which she insisted would play host to seven different coloured stripes of fruit. I cut out so more shapes, re-rolled and cut out a much bigger rainbow. The shapes all baked for 10 minutes, in which time I cut up all the fruit into different bowls, mainly so I could take this picture: 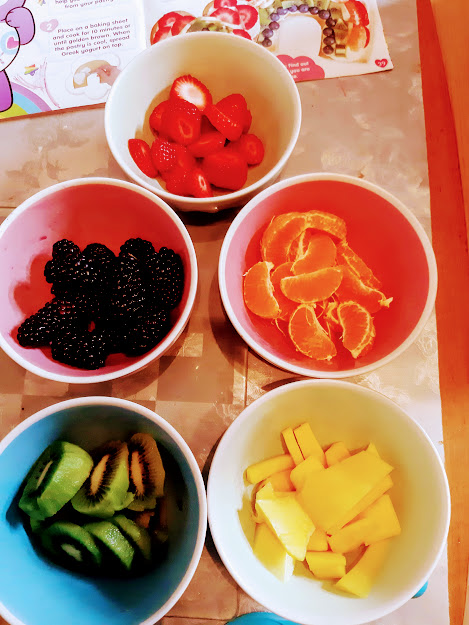 I also tested Eva’s Greek yoghurt tolerance by asking her to taste a little bit before we slathered it all over the fruit. Turns out I was right. Initiaite Plan B.

Once the shapes were out, Eva spread the cream on them and positioned the fruit and from there on in, it went fairly smoothly. Even my big rainbow wasn’t quite big enough tho: 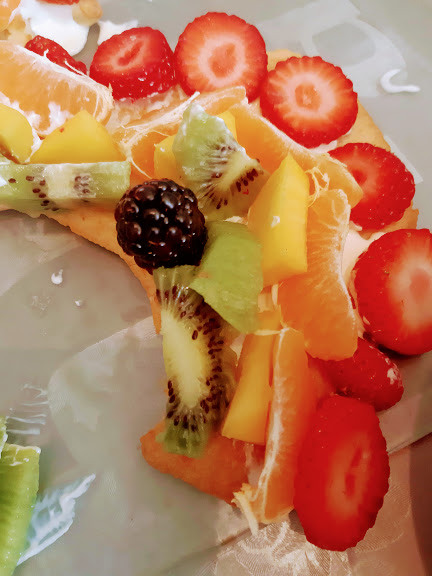 That single blackberry is clinging to the side for dear life and the grapes (and MORE GRAPES) and notable by their absence.

I liked some of her other designs tho, like this one which reminded me of sushi:

When we came to eat them, I think we were all glad we’d gone with the cream and not the yoghurt. There’s not a lot of sweetness in shortcrust pastry and the sharp edge of the yoghurt wouldn’t have helped. I think kids’ magazine always have to provide healthy ingredients though, don’t they?

What did help was a generous sprinkling of vanilla sugar, which transformed it from lumps of bland pastry and cream to something quite delicious. Top LWAT Food Blogging tip – always add sugar.

I know, I should do this as a career….

This entry was posted in What I suppose you'd call "tips"....? and tagged food, quarantine. Bookmark the permalink.