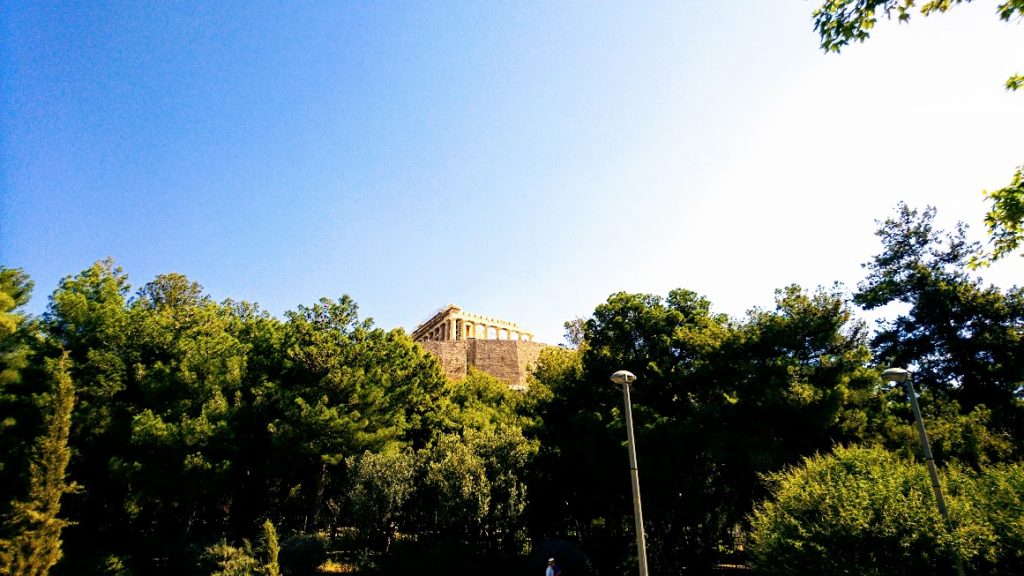 In the last post I promised you some slightly more exciting things would happen in this one…well, buckle up baby. We’re going to the Parthenon.

Every holiday, my kids write a planner and fill in what they’re doing each day. It helps keep me sane. This half term, Roo had designed it and over four days had written “Greece”, “Greece”, “Ancient Greece”, “Greece”. This was the “Ancient Greece” day and to get there we were taking the very modern tram. T5 – also known as the Plato Line apparently – went straight into Central Athens from Kalamaki and it seemed a simple enough job. Even getting the Athena tickets from the machine seemed straightforward enough, although annoyingly you can’t buy half fares from there. Eva was free though as she was under 7, so that kinda compensated for having to buy a full fare for Reuben. The machines were cash only and didn’t take anything above a 20Euro note but one of the two at Kalamaki was functional and delivered our tickets. More on that later though.

We validated the tickets as soon as we got on the tram – there’s something like an Oyster card reader that flashes green when you’ve done the right thing. The tickets are then valid for 90 minutes’ worth of travel (if you buy the 90 minute option….24 Hour options also available). It took a little googling but we figured it out. The entertainment on the tram was provided by a group of German lads who’d found a phone belonging to an Englishman called John. An associate of John’s kept calling and, despite their excellent English, they were struggling to convince the person on the other end of the line that they’d found the phone and not stolen it. I was tempted to step in but they seemed to be handling it….John, if you’re reading this I hope you got your phone back. Those boys really tried.

We alighted at a station called Fix and had about a 1km walk sharply uphill towards the Acropolis. Along the way, an old man pressed some postcards into Eva’s hand saying she was his granddaughter. I mean, she wasn’t but I understood the sentiment. By this point, she had mastered saying “thank you” in Greek (transliteration: Effkarisoe…don’t ask me how to spell it) and she unleashed it on the old man with devastating effect. Apparently the girl can be charming at times. 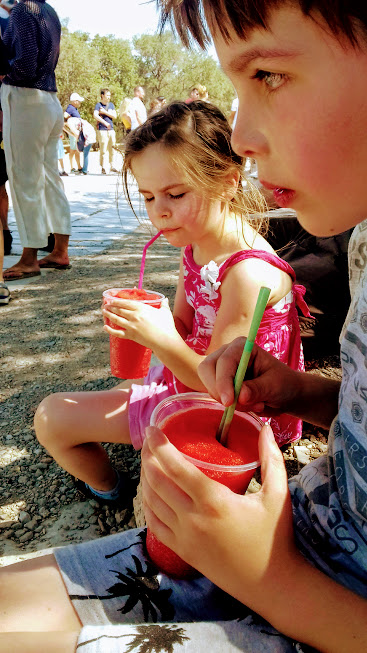 So the Parthenon is obviously a giant tourist trap and priced as such. It would cost 60Euros for us to go up to the actual ruins, so we spent 18Euros on icy fruit drinks instead and just took some photos in front of it. I know I’m a cheapskate.

Then we climbed up the Areopagus Hill which was both free and amazing because the view from the top stretched right across Athens. It’s the site of the ancient court and also where the Apostle Paul makes a speech in Acts 17 but all I realised at the time was that it was a darn good place for taking touristy photos. Like really.

Don’t wear flip-flops up there like I did though. It’s really slippery and there’s a long way to fall. In fact, the marble in the pavement of most of Central Athens makes flip-flops a health hazard. I spent the whole day narrowly avoiding falling over.

Coming down from the Acropolis, we may have got slightly lost but it meant we stumbled upon some more interesting historicky things, like the tiny Church of the Tranfiguration (Reuben said it smelt funny) and the Roman Agora with the octagonal Horologion of Andronikos Of Kyrrhos at the end: 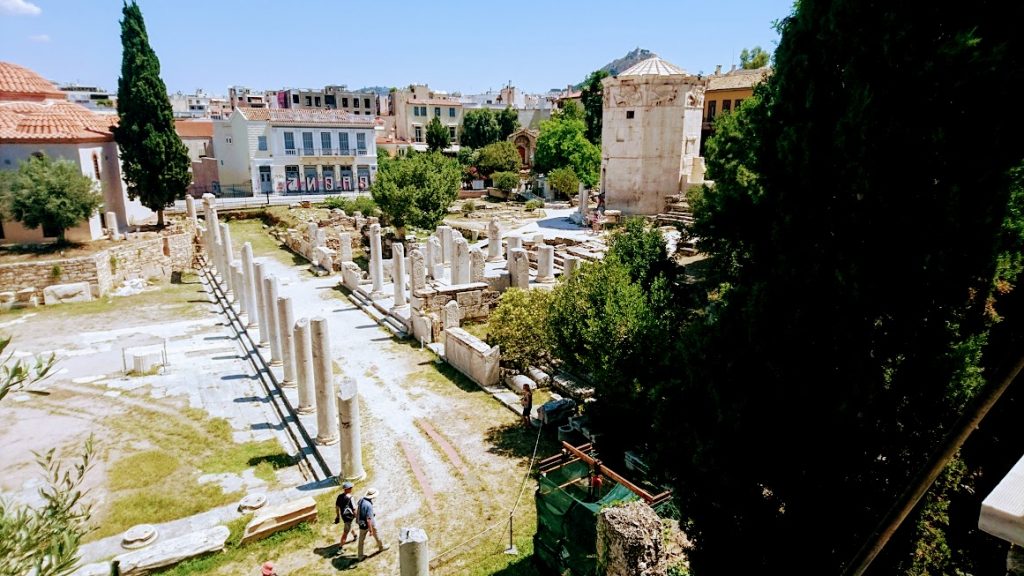 The kids were hot and bothered but I think they were still a bit impressed by all this history. True, Eva was more impressed with this array of pretty dresses: 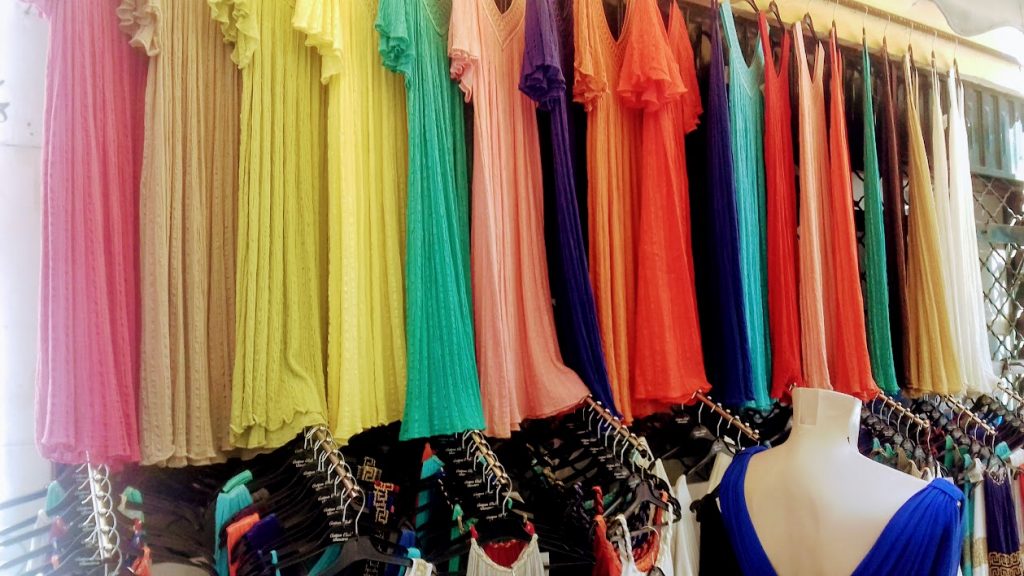 And Reuben spent longer looking at the crocheted Star Wars toys than the ancient Agora but both these things are to be expected.

We were almost on the right track now, after many wrong turns, but we made a quick diversion past the Cathedral and bumped into a parade that turned out to be the Best Buddies Friendship Walk. But we were on a mission to get food and there was only one place the kids wanted.

Believe me, I’m disappointed in myself too. The day I googled the route from the Acropolis to McDonald’s was the day that I realised that I was part of the problem. And as you’ve probably realised, we weren’t that good at following the route. Still, Eva hadn’t eaten properly for days and I was willing to try anything. It worked, she hoovered her McNuggets and my phone automatically connected to the WiFi. But yes, I know, I know…. 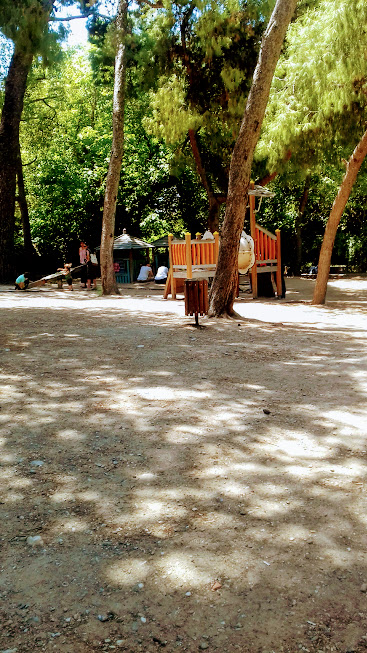 After lunch, we went for a walk around the National Garden, handily nearby. There was a lot of cool, grassy shade but the kids obviously wanted to play in the dusty playground instead. We also found some more ancient ruins and I’m not convinced that Roo was meant to be sitting on them but…ah, blame Nathan for this photo: 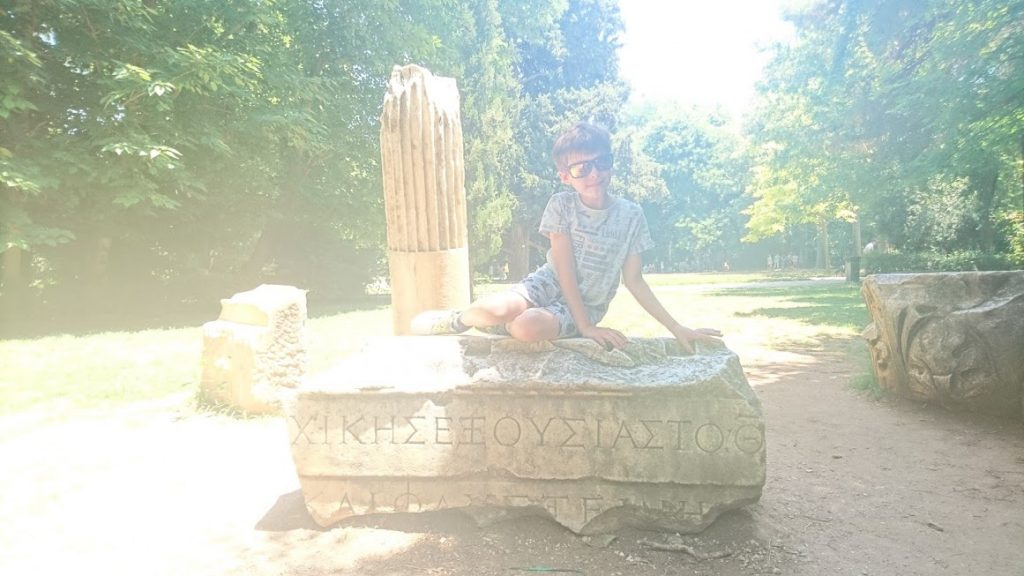 There was also a “Child Library” which was sadly closed, as we’d hoped we could exchange the children we had with us for some better behaved ones there. The kids were relieved that it was closed but honestly, we were a bit disappointed. We started to head home but first I thought it’d be a good idea to find the toilets. So we followed a sign, which seemed to take us on a stepping stone path through the forest. I spotted some buildings that I thought might be the loos but it turned out to be the back of the Greek Parliament and a very nice security guard informed us that we should get back on the main path before he set the guard dogs on us. In a polite way of course, but we didn’t need telling twice. Actually, we did need telling twice as it didn’t quite sink in first time but we certainly didn’t need telling three times. We never did find the loos but, as Nathan pointed out, if we’d been chased by guard dogs we probably wouldn’t have needed them.

After that it was definitely time to get back to the hotel and happily, we passed some of those Greek soldiers with the pompom shoes on the way. Another box ticked!

Getting home was a little trickier than expected because there were no ticket machines at all at Syntagma tram station. So I abandoned the kids with Nathan and cut back through the square into the Metro station to get some tickets. Ah well, at least the ones at Kalamki worked…..or so we thought. That’s one for tomorrow’s post…. 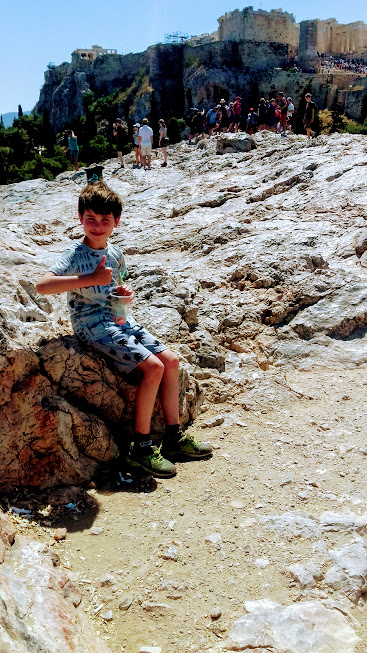 This entry was posted in Creating precious childhood memories or something (days out) and tagged Greece, holidays, travel. Bookmark the permalink.