I started writing this on Friday night, sitting on the Victoria Line. It was to be a post about the fun of going out and having fun in London, without my kids. 24 hours later, something happened to make this feel wholly inappropriate. But let’s not stop going out and having fun just because some crazy people have some crazy ideas. Let’s continue life as normal. And so here’s the post I started writing that night….
It’s been a wild week.  I’m writing from a Victoria Line train at the rock n roll hour of 10:20pm cause I’ve been out. And I’m proud.
Not just today,  no no.  All week we’ve been partying as hard as two middle aged parents can when they’re temporarily let off the leash.  The kids are scaling castles and fighting dragons in Wales and we’ve been child free and care free.  Other than work,  obviously.
Let me tell you about Wednesday. I finished work at 2ish and was planning to do Open Air SwingTrain at 5:30. I’ll get on to that.  But first,  I had an afternoon to kill.  So on some vague impulse,  I went to the Barbican. And some vaguer impulse still caused me to wander around the Museum of London roundabout and under the Barbican tunnels before I managed to orientate myself.  The Barbican has that effect on me. While wandering around, I found this plaque, which I’m including as a shout out to all my Methodist readers (Hi Mum!). I can’t say my heart was strangely warmed by the traffic fumes in the tunnel but my lungs were.

The reason I’d picked the Barbican was because I’d read in Time Out that there was a Sheila Rock exhibitions in the music library there. Cause reading about exhibitions and going to them is the kind of thing child free people do. Sheila Rock is a music photographer and there were some gorgeous shots of Debbie Harry in a catsuit, as well as bands like The Clash and The Cure. I’d never been to the music library before and I’m not sure I knew there was one but it’s there, on the second floor. I spent around ten minutes browsing the photos and listening to some of the bands at the listening point, but my attention had been snatched by the next exciting thing in my eyeline.
There were pianos! And you could just book one to play on for an hour! With a whole library’s worth of music to choose from. It was great fun. I booked in, sat down for 20 minutes to browse the NME and then had only the slightest amount of awkwardness kicking someone else off at 4PM. I was possibly too overwhelmed by the sheer amount of choice of music to make a sensible choice, so I played my way through “Joseph and the Amazing Technicolour Dreamcoat” and a book of English folks songs. I had my reasons. In case you’re wondering, these were electric pianos and you could borrow headphones so no-one had to put up with me screwing up the fiddly bits in “Rule Britannia” while they were trying to study. 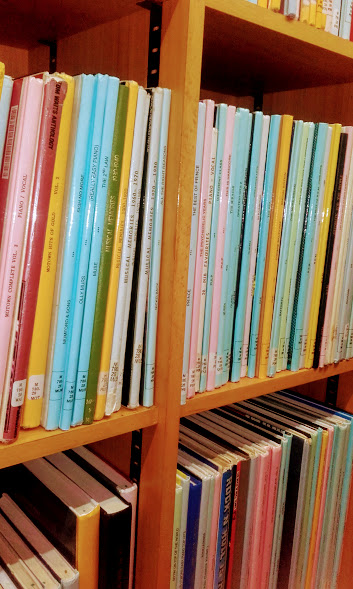 I also found the children’s library on the same floor and I had no idea that was there either. I didn’t linger because – see aforementioned childlessness – but it looked like a lovely place to hang out on a rainy day, with comfy seats to sit and read in. And it was shaping up to be a very rainy day, as I left the Barbican by a confusing and convoluted route that took me past the conservatory and down three floors’ worth of ramps outside. Next stop, Spitalfields Market for SwingTrain under the Sails. 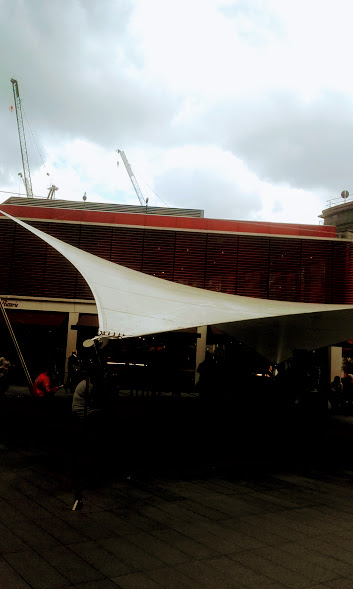 Now, I have no photos of me sweaty and chaotic, doing an exercise class in public in front of office workers but it happened. In fact, it’s happened twice now. The first time was a few weeks back, when I took the kids down after school and Eva finally got to show off her Charleston finger:

There are more sessions coming up over the summer – the next one on 12th June at 5:30. It’s a free class that any passerby can join in with so if you’re curious about SwingTrain, it’s a good way to check out what it’s all about.

But back to last Wednesday, and Nathan arrived at Spitalfields to escort me home, stopping only for an icy fruit drink. We had more childlessness to enjoy and spontaneously decided to do something a bit spontaneous – pancakes and wine at La Boite, in the converted signal box in Highams Park. I’d been there before but 5PM on the last day of term with three kids in tow is a bit of a different vibe to 9PM with my husband. Am I allowed to say which one I prefer?

Nathan took the recommendation of the menu and tried the cider, which came in a ceramic mug and looked for all the world like a cappuccino:

Apparently it tasted like scrumpy though. At around 9:45 some other people brought a small child into the box and at that point, we moved on to the pub. Where we partied hard until we had to be kicked out at closing time. No, really. The last people in the whole pub. ROCK AND ROLL. And we didn’t even get to lay our last few tiles down:

Yes, we know how to party hard. Pity we have the kids back again now… 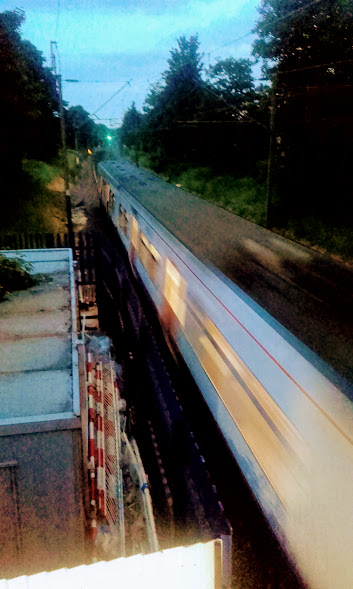 This entry was posted in Just wandering.... and tagged Central London, childfree, East London, eating out, exercise. Bookmark the permalink.